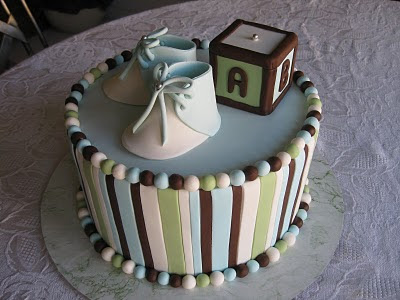 This cake is for a baby shower. The hostess gave me the invitation which was the inspiration for the stripes. She also said she would like baby booties on top of the cake. So this is what I came up with. I hand made the booties and the block out of gumpaste.
The flavor of the cake is chocolate with vanilla buttercream tinted blue. I also made 50 mini cupcakes. Half were chocolate with caramel filling and vanilla buttercream frosting. The other half were vanilla with caramel filling and vanilla buttercream frosting. All the frosting was tinted blue and the vanilla cupcakes were tinted blue as well. 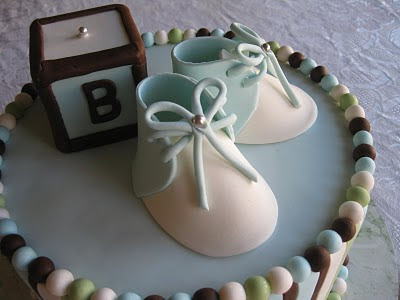 HOW ADORABLE! Each thing you do is more wonderful than the one before.

That's adorable. I love those colors!

It is so cute!