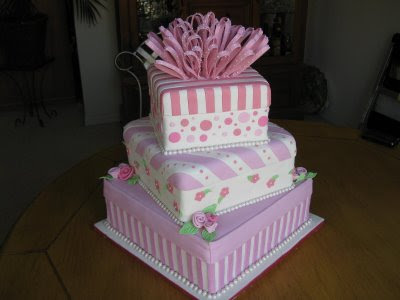 I made this cake for a clients 10 year old daughter's 1st Communion. What a lucky girl she was to receive this for her party. When I delivered it her eyes lit up and she was jumping up and down in delight.
Her parents told me later that some of the guests at the party thought it was a present and did not know it was a cake until they cut into it. Mission accomplished!!

hi pam,
another gorgeous creation!how do u keep it up?? love the colours... n you are right... what a lucky girl!
2 more weeks to the big move... hope to catch u for a chat soon :)
take care xo